The term Yizhimei” 一支梅 is a reoccurring term among the schools emerged from Shi Gao Can. Strangely enough Shi Gao Can changed the name into ‘Erzhimei’ when he was in Penang; there are a few different moves as well. ‘Luohan’ is a more general term than ‘Yizhimei’. On the one hand as a set form, but also a style of martial arts. Shi De Qian from Henan Shaolin Temple in China, wrote the history of Shaolin and included ‘Yizhimei’ in the (Shaolinsi wushu baike quanshu) Complete Encyclopedia of Shaolin Temple Martial Arts, volume I & II.

Sao Lim Yi Zhi Mei from Penang is a ‘chapter’ that I’ve learned in Januari 2020 and I’m studying it until this day. It is the first formal chapter of the Sao Lim school in Penang.

Below a translation of part of the description in the book: 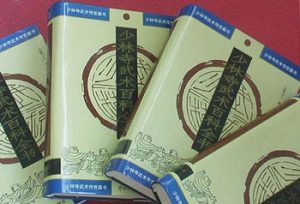 Chan Master Gaocan, originator of Southern Yizhimei Quan, is responsible for spreading it. According to records in the Boxing Manuals in Songshan Shaolin temple, the source of Chinese Shaolin Kungfu, Yizhimei Quan came from Shaolin temple.
In Jiaqing time of Ming Dynasty, pirates often violated China. Southeast coast. Many times the government ordered the fighting monks of Shaolin temple to go and suppress the bandits. Some of these monks died and others were heavenly injured on their legs. The latter couldn’t return and stayed in the area and started teaching to the locals. Because of their injuries they had to mainly teach arm movements and only a few kicking skills. As a result, later a saying emerged in Chinese Wushu circles called: ‘Southern Punch, Northern Kick’.
Then in Qing Dynasty, a monk and his five students names Jingren, Jingliu and so on left Songshan and moved to the South, traveling through Fujian, Guanzhou, Hainan, Taiwan and Nanyue. And they deeply propagated Shaolin Kungfu. As the years went by the boxing skills from Songshan gradually changed into South Shaolin boxing. After that it spread all over China and became the best Kungfu skill in South China.
Southern Yizhimei Quan is a branch is a branch of South Shaolin Boxing. Yizhimei Quan is the evolution of Shaolin Luohanquan. Gaocan improved Yizhimei Quan over the years by long time actual combat as to make it more consummate. He started teaching in Singapore and over the years the practitioners of Yizhimei Quan numbered over the thousands. It is now famous in South-East Asia and beyond.

The main characteristics of Yi zhi mei quan are:
1. Punch and mind united, deeply distilled,
2. Simply vigorous, couple hardness with softness;
3. Having both offense and defense, suitable for actual combat;
4. Special footwork and punch to all directions.

In the 87 movements of Yizhimei Quan ‘the body shape is like sitting down’ from beginning to end. Therefore the horse-step is very common, just like an old monk sitting in meditation, especially the triangle horse step, just like someone side-sit there, reading books or striking bells. Although there are movements, the range is not so big. The names of boxing skills are usually Buddhist technical terms, for example, Arhat, Buddha, Old Monk, Prostrate and so on. It is thus clear that, Yizhimei Quan, is originated from gestures of monks who sit in meditations, combined with hand and feet movements. It then gradually developed until now.

The unity of punch and mind makes skills and movements, therefore shapes are found. Only have shapes but now power cannot subdue your opponents, so if you want to subdue your opponents you should have power. You can also win even when you are controlled by your opponents, this is the essence of Yizhimei Quan.
With the long time hard combat exercise by the master of Yizhimei Quan and their students it is becoming better. And now there are eyes in every movement, there are divisions in every gesture, there are rhythms in every division, playing in quick rhythm. All the movements are fierce, accurate, firm in offense and airtight, hard as iron in defense. If you use is suitably and properly you can win every battle. As a result of using Qigong, Yizhimei Quan has its deep essence.

Yizhimei Quan, just like the Kungfu in Songshan Shaolin temple,is not flashy, and every movement is for actual combat, standing in winning the battle against your opponent. When using punching and palm skills of Yizhimei Quan, hands usually roll out, move suddenly and strike hard as the thunder.. So an important point is ‘firm’. Firm makes power, and power makes sub dual. Nevertheless, it is firm but gentle. For instance, when taking back our hands, we should turn outward or inward, using gentle and turning power. Gentle as the virgin, move like the clouds. Gentleness can conserve strength, and then becomes firm suddenly. And firm power makes the punch firmer and more powerful, and as a result the practitioner can be unmatched. This is to couple hardness with softness, using every movement like this, and using wisdom and skills together.

3. Having both offense and defense, suitable for actual combat.

Yizhimei Quan has both offense and defense not only in the whole series, but also in every movement. Whenever we use a skill, we usually hit our opponents’ vital part fiercely, meanwhile we also should be strict on guard against our opponents’ plot. In other words,” if I cannot hit you, I will not let you hit me either’. Just like ‘double palm hit’ and ‘triple punch’ in the series, have both offence and defense. The key is, use one palm or fist to hit opponent’s vital part and put the other near the side of the body as a way of defense.

4. Special footwork, punch toward all directions.

Yizhmei Quan has obvious characteristics in footwork, that is; it has only a few kinds of footwork but each kind is very concise, having the merit that it can adapt itself to changing conditions, pay more attention to defense, use defense to confuse the enemy and attack where the enemy is unguarded. For example, when practicing Yizhimei Quan one usually use the horse-step, triangle-step and bow-step. And one use the horse-step the most. Its merit is that one can stand as a stake, still as the mountain. Though being attacked fiercely, we can’t fall over, nor lose balance, out limbs can’t be seized. Especially, we can use constant defense to confuse the enemy and let him attack recklessly, therefore, we can then attack him and then subdue him. Here are some examples:’ little rabbit uses a fan’, ‘turn over your palm to make rain’ and ‘God picks eggplants’.
In all the 87 movements of Yizhimei Quan, we usually use fist-attacking or palm-attacking as the offence and almost never use kicks. No matter moving forward of backward, dealing with the left of the right, we usually use palm or fist. To attack, spit, tease, grasp, beat, flick, snatch, smash or rub. So that is ‘using Yizhimei Quan to attack all directions’. In fact, we can not only use it to punch towards each direction separately, we can also use it to attack all directions at the same time. ‘No matter which directions my opponent comes from, I can defend. My gesture is like a buried stake, and my body movers and turns like a mill. Therefore, even when 8 opponents attack from 8 different directions together I can use a pair of fists or palms to block’.

These words are the purport of Yizhimei Quan.”