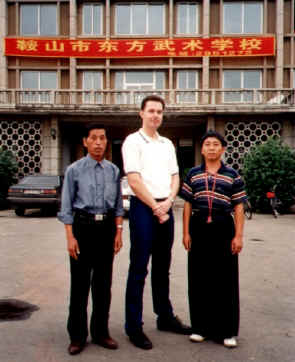 I’ve lived in China for almost 2 years, and I was always looking for martial arts. China is different than Holland; there are very few schools that teach openly and advertise. After searching for a long time I found this school. As most martial arts school that have their own building, students live on campus. Their martial arts and qigong shown on this page is for show only; actually they are trained to become security people or body guards. Their display of martial arts is something like a divertissement to impress future clients. 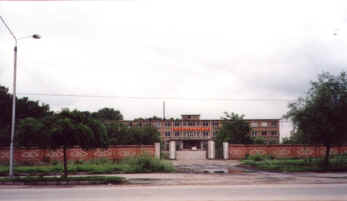 After seeing their Liondance performance downtown (they do this once a year for local festivals) I decided to pay them a visit. The school is on the outskirts of town (see pic above) I decided to go their on my bike (something my girlfriend wasn’t to happy about …) It took over an hour to find the school. But they were very happily surprised by this unexpected visitor of a foreigner. On the left the manager and on the right the Chief Instructor of the school. The latter is a local, and since his youth he wanted to learn martial arts. Everybody said he was crazy and that there was no future in martial arts, but he decided to pursue his dream anyway. Finding no serious martial art school locally he went to Hebei province, generally seen as the centre of Northern Styles of China. There he learnt Chang Quan, Tongbei Quan and another obscure style which involves rapid body movements and moving fast on a straight line while turning the body; the name escaped me.

It was the end of the term and after a few days exams would start. No more lessons and the students were resting. At my special request a demonstration was arranged on the spot. Usually the students were military uniforms, but for these kind of demo’s they change into flashy costumes.

The students live on campus for one year only. 3000 Yuan tuition fee and 350 Yuan a month for rent of the room and food. Most of the students find a job after graduating. Many of them move to the harbor city of Dalian where supposedly a lot protection of rich people is needed. 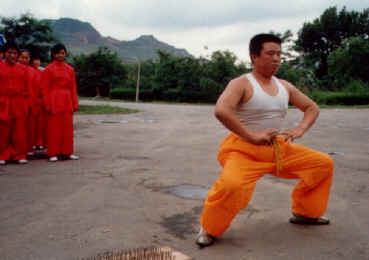 Qigong exercises! Remember; everything is ‘fake’. Fake in the sense that it is a skill everybody can learn and actually has nothing to do with development of Qi. Anyway, here chubby is doing preparational breathing exercises… On the left there are some girls … It surprised me to see girls in the school, but nevertheless they were there. At the bottom of the picture one can see the ‘bed of nails’ he’s going to lie on.
Just relax and wait… 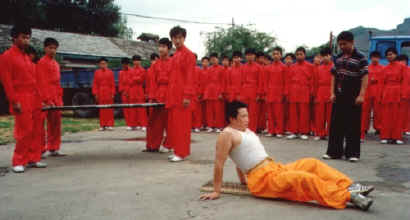 The large wooden board is hauled over and out and put on top of our chubby friend. 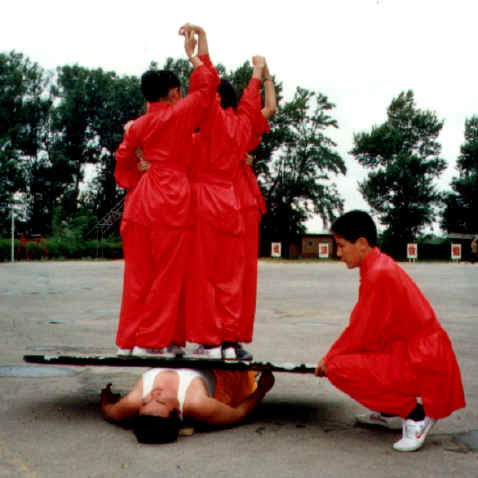 This is it! Please note that only the girls were allowed to jump on! 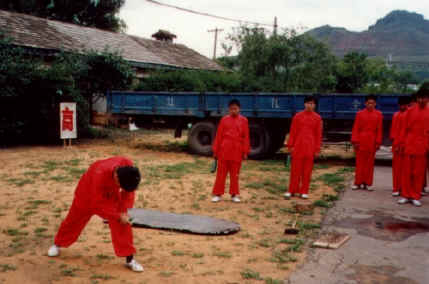 Breaking beer bottles on their heads. I was asked pick a ‘victim’. And a victim he turned out to be … I picked a guy I saw earlier standing on guard. Wrong choice; he looked a bit sickly. On the picture on the left it is the first guy in line with a bottle in hand. He started to hit his head, but not hard enough; clearly he wasn’t to sure about himself. The trick here is; hit it hard and all the energy will go into the bottle which will cause it to break. The pick above clearly shows it; it just broke and beer and glass is flying around. But my guy just couldn’t do it and all the power of his blows went directly into head, which happens when you don’t hit it hard enough. In order to save his face he kept smashing it into his head he at some point he started to wobble all over the place. The Chief Instructor intervened to save his students head, and said, to save his own face, that the student was recovering from an illness. Then others broke some bottles, with no effort what so ever.

The grand final; two guys on top of each other, the bed of nails and another unfortunate guy. On top of that a piece of the mountains you can see on the background of the other pictures. It broke in one hit!
A few months later they would appear on local television and do their Qigong act.